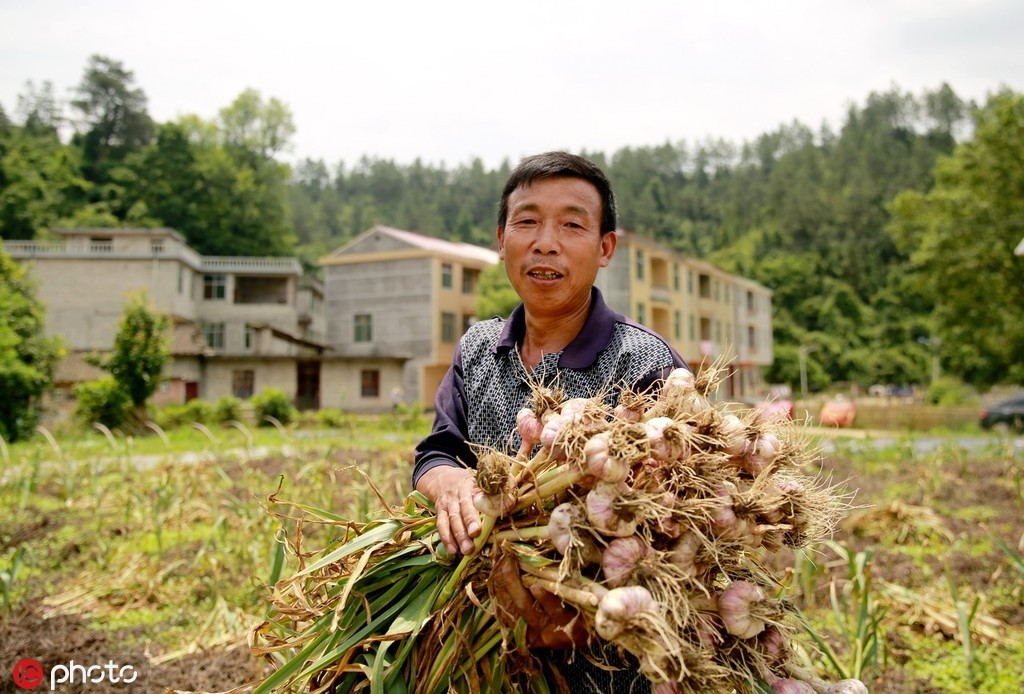 A farmer in Ji'an, Jiangxi province, harvests garlic on May 15, 2019. [Photo/IC]
While California's garlic growers are grateful for US tariffs on Chinese garlic, a classic American spice maker is not thrilled.
McCormick & Co Inc, a Fortune 100 company started in a basement in 1889 in Baltimore, Maryland, says its hundreds of recipes use mostly Chinese garlic, and that the bulbs are different from the ones grown in the United States.
"They're not substitutable," CEO Lawrence Kurzius told Reuters. "Just like wine, origin matters and terroir matter."
A spokesperson for McCormick did not reply to a request for comment as to how the company would adjust to the tariffs.
As of 2016, China produced 80 percent of the garlic in the world, according to the Food and Agriculture Organization of the United Nations, Statistics Division (FAOSTAT). No other nation comes close.
But now tariffs have made China's garlic, most of which is produced in East China's Shandong province, more expensive for US importers. The levies were increased from 10 to 25 percent on May 9, as the US raised tariffs on $200 billion of Chinese goods.
McCormick had $5.3 billion in sales in 2018, and a good part of that number comes from its garlic-flavored seasonings and foods.
A search on the McCormick website for the word garlic yields 456 products containing the savory ingredient. There are offerings such as Old Bay With Garlic and Herb Seasoning, Garlic Jalapeno Seasoning, Thai Kitchen Roasted Garlic Rice Noodle Soup Bowl, Lawry's Sesame Ginger Marinade With Mandarin and Simply Asia Garlic Sesame Rice Noodle Soup Bowl.
McCormick also has a dedicated page featuring 63 Chinese recipes, several of which use garlic flavors.
While soybean silos filled up in the Midwest as top buyer China scaled back its purchases, Christopher Ranch in Gilroy, California, a town where garlic is the theme of a three-day summer festival, saw domestic garlic sales rise 15 percent in the last quarter of 2018, after the US put a 10 percent tariff on imported Chinese garlic in September.
US President Donald Trump pushed the tariffs higher this month after trade talks with China were unproductive.
An escalation in the trade dispute came just a few weeks before the American garlic harvest.
"We anticipate a surge in demand for California garlic in the coming weeks," Ken Christopher, executive vice-president of the family-owned Christopher Ranch, the largest of three remaining commercial garlic producers in the United States.
"We understand in a broader economic sense that a trade war is not in the US best interest," he said. "But since the tariffs were happening anyway, we needed to be sure that garlic was part of the equation."
California garlic has traditionally sold at much higher prices than Chinese garlic. It now goes for about $60 per 30-pound box wholesale, according to Christopher.
Until recently, Chinese garlic sold for $20 per box, but that has risen to $40 with tariffs and soon will likely go higher.
The pumped-up profits that American garlic farmers have reaped from tariffs are an exception in the US agriculture sector.
Last year, China reciprocated against US tariffs with levies on American goods including soybeans, corn and pork. Farm incomes in the Midwest and mid-Southern states continued to decline in the first quarter of 2019, according to banker surveys released this month by regional Federal Reserve banks.
Reuters contributed to this story.

Back
Last One:
In 2022, the inventory of garlic in summer harvest will reach a new record high. What is the future 2022-09-20
Next Article:
Back to list